Piet Mondrian (1872-1944) was a Dutch painter known for his contribution to abstract art. He was part of the De Stijl “the style” art movement which advocated pure abstraction and a reduction of form and color. Neoplasticism, his particular brand of non-representational form, was restricted to three primary colors and a grid of black vertical and horizontal lines on a white ground. The radical simplification of elements in his paintings reflect what he saw as “the spiritual order underlying the visible world”, which ultimately creates “a clear, universal aesthetic language.”

Mondrian’s early work was naturalistic and Impressionistic, consisting of landscape and still-life paintings. He experimented with Pointillism in 1909-1910. By 1911, he began working in a Cubist mode, having been inspired by the works of Georges Braque and Pablo Picasso. During this period, his paintings, while still representational, were increasingly dominated by geometric shapes and interlocking planes. For the duration of World War I from 1914-1918, Mondrian was forced to stay in the Netherlands. There he met Theo van Doesburg and Bart van der Leck, with whom he eventually founded the De Stijl movement. It was also during this time that he developed his theory of neoplasticism. 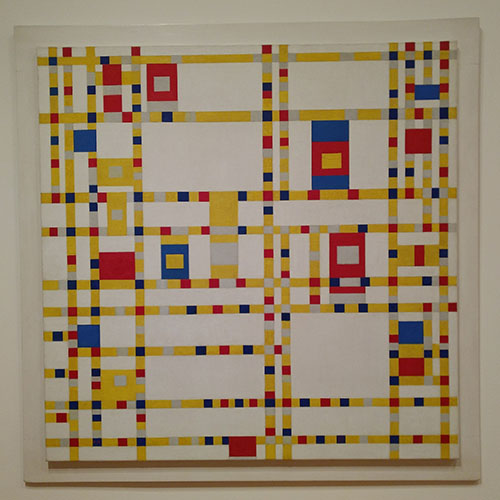